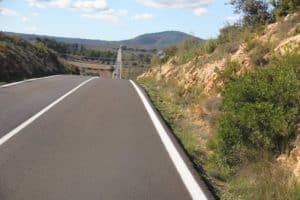 Apologies for the 22 day hiatus due to my very pleasurable weekend with all the family in Skeggie, so enjoyable I booked it for next year too. A first 🙂
Plus a week of the time was pleasurably spent introducing Sally to the delights of biking around Ibiza 🙂

Yesterday I started my tour again from Valencia,and its excellent  Hotel Valencia Center, I liked it so much I stayed a couple of days extra after dropping Sally of at Valencia airport.  In fact I could easily see me returning for longer 🙂

It was a very tough day too, with a huge climb according to Strava of 6,423 feet over 67 miles with a wind direct from the West and yes I was heading West 🙁  It was cold too and I was dressed for the sun not high altitudes :-(. Finally arriving at the delightful Hotel Jalance with it’s very steep driveway 🙁 frozen and totally wrecked.

This morning I dressed in every bit of cycling clothes that I had, the wind continued and perhaps I should have stayed, that’s the problem with booking a hotel the night before 🙁

The day was pretty murderous climbing up to 3,000 feet and then, due to the strength of the  wind, having to pedal down the hills in a low gear 🙁
The day finally ended with a climb, as the name suggests, to Chinchilla de MONT Aragon and the freezing cold bedroom at El Volante with it’s very tepid warm water shower (I didn’t bother as I would never have warmed up again 🙁 You can view the Strava here.

I think I will be sleeping in my clothes but I guess for €25 what else do you expect. My slowest average speed ever according to Strava of 8mph and not a speck of sun all day.