The more observant of you may wonder what happened to Day23, the answer is not much! I basically I flew back out to Zaragoza on Ryanair for considerably less than the flight the other way! Just as well I called in at home as the central heating had deflated so when Nest told it to wake up nothing would have happened 🙁  The flight back was uneventful except for getting some great aerial pics 🙂 The taxis refused to take me to the hotel (to close I suspect) so told me to to get on the bus instead, The Hotel Diagonal Plaza is OK except for lack of staircases and a shower like in a second rate British B&B 🙁 Their dinner was nothing to write home about either.

So today it was Geoff meeting the Sistema Ibérico mountain range with it’s over 3000 feet passes 🙁  I left Zaragoza on a very stony path alongside The Canal Imperial de Aragón before hitting the really quiet N-330 road, lots of road bikers around all of them happily waving to me. Compare and contrast to Germany 🙂

I noticed that the front light was looking rather limp, poor things bracket had suffered metal fatigue and sheared in two 🙁 I started searching the industrial estates for the likes of McKays but to no avail. Eventually at a garage I worked out a scheme using ty-raps to hold it in place until the next bumpy track.

Then it was the major climbs, really interesting to see how the road has grown over the years, as I crawled up, from a twisty track to the highway I was on to the motorway zooming over my head 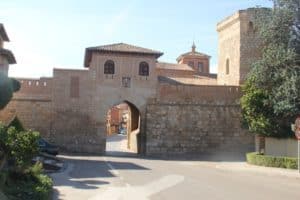 The town of Daroca is quite stunning with its castle and medieval centre, should have stopped there but I had booked the Albergue in the next village at Baguena.

A great days biking in excellent weather. Strava says I did 67.9 miles and 3,285 feet of climbing and I’m well pleased with the 11mph too, given the stony track & cruising around industrial estates 🙂

Todays pics should be here

and the heart data is here: