I at to smile at this twitter from Fitbit:

Have you ever wondered how far you walk if you add up a year of steps? Keep an eye out for an email from us to learn about your 2012 stats!

Since I’ve already accomplished this and more by using the excellent Fitbit API and the  script written by John McLaughlin aka @loghound for Google docs. Ernesto Ramirez also made an  how to video on Vimeo which easily explained the process, so that even I could do it!

The results can be found in this google spreadsheet (It may take a while to download, it’s rather big.

So an interesting year for me. 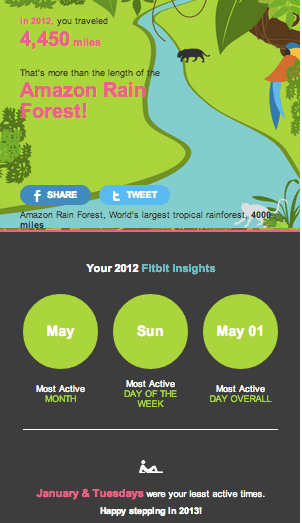