I woke up from a terrible nights sleep with a thumping headache feeling awful. I popped some Nurofen but realised I was probably suffering from dehydration 🙁  I went into Plymouth bought some new inner socks and a 2 litre bottle of carbonated water (Why don’t shops  /garages keep carbonated water in the chiller cabinets? ). I instantly drank 1 litre of it! 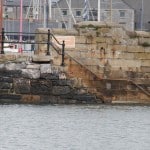 I reached the Mayflower steps in the harbour and saw the Mount Batten ferry, I succumbed and took the 5 minute ferry instead of walking the 7.5 miles around a very built up area.

I then started the day’s walking, marvelling at the huge blocks of stone that have been carved to act as way markers (till the money ran out at the top of Jennys Cliff).  I quickly reached a fine cafe on Jenny’s Cliff where I took a lot of pics for my sister Jenny 🙂 The footpath has been reinstated so The Guide is incorrect about using the road.

The walk from there was very pleasant, looking at the submarine and all the warships cruising around. Then on through the Heybrook Bay holiday home park and on to Wembury after which it seemed to take an age to the ferry at Warren Point which only runs from 3pm to 4pm. So just as well I omitted the 7.5 mile walk otherwise I would have got there to late!

After the 5min £2.50 crossing with the ferryman bemoaning how few passengers there were it became a lovely walk along the very scenic old  carriage way apparently buit by The Barings. and then back along the top to my lovely accommodation at Worswell Barton Farmhouse where Jackie made me feel very welcome. Their solar heated shower now takes first place in the most powerful one on my South West Coast Path walk 🙂

Later in the evening Philip ran me down to the Ship Inn in the centre of the delightfully named Noss Mayo village (apparently from the French word for nose). An excellent meal too

Weather wise it was a fine day with a bit of sun and no wind.

The pictures  are here, statistics here and Everytrail below