I found this day really hard with the relentless easterly wind slowing progress down and making the riding unpleasant.

Maybe it was the poor breakfast of 4 bread rolls and garlic cheese, I didn’t see the local shop until after I had started, plus there was a complete scarcity of open cafes until 35 miles into the day & then only a simple place in a craft museum. 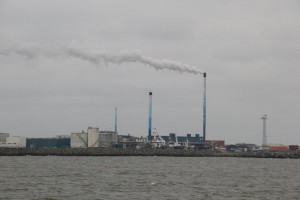 The worst part however are the long spits of land on either side of the ferry at Thyboran dead straight and flat with no protection from the gale blasting at me. It was amusing to see the smoke from the factory chimneys barely getting out before been blasted horizontal by the wind.

I then developed a poorly stomach leading to more wind problems, probably not helped by munching my way through a packet of Nellie Dellies salty liquorice (On the packet I now read, Enjoy in Moderation!!).

The end of the day was a struggle getting into Hanstholm, fortunately as the name implies the previously booked Harbour Inn was on the coast not up the hill in the village! 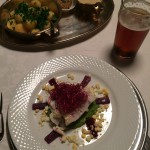 In the evening I managed to get a decent meal at the Montra hotel with some of the whitest and delicious fish I have ever seen  the dish was called Kogt Vesterhavstorsk.

The Strava is here and pictures are here.