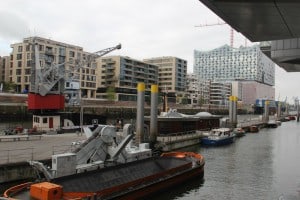 Today was the final day of me biking alongside The Elbe. I decided to keep to the East bank to Brunsbuttel as I wanted to cycle on into Denmark and the ferry from the West bank across the mouth is meant to be very irregular.

At Sandra’s suggestion I visited the ‘New Hamburg.  HafenCity is in the old docks, I didn’t find it to inspiring although certainly much better than her other suggestion, the dual carriageway called Reeperbahn which seems in terminal decline.

I left along a pathway which can’t make it’s mind up whether you can cycle along or not! at least it’s flat and avoids the cars & a hill. The views of the docks are very good and it’s interesting to see a ship dedicated to shipping bits of aircraft around for the great Airbus project.

Once out of the city the wind became ferocious blowing directly of the North Sea straight into my face 🙁 I had quite a few heavy squalls of rain as well so weather wise not the best of days. I was beginning to think you should definitely cycle The Elbe from North to South.

The cross channel ferry was operating but with a vast queue of several kilometres long waiting for the trip to Cuxhaven a side effect was a lady had set up a wagon selling fishy buns etc and drinks so I could stoke the boiler again. 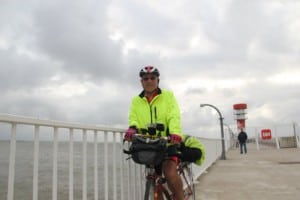 It was getting quite late when I finally arrived for the crossing of the Kiel canal, by ferry. Interesting to see a vast container ship nudging its way into the lock, I finally made it into Brunsbuttel at 6pm to find the first hotel full the second hotel a smokers den & more with the third hotel also full, I was starting to get a bit concerned 🙁 However, a charming lady across from the hotel ran a classic b&b, loads of little notices & very fussy but at least a bed with views over the river but no internet on the day of The Apple iWatch event & my 1GB of phone date used up even though it was on GPRS all the time.

The final Elbe Stats are:

So biking The Elbe was 1,010km in 11 days of cycling. The surprising number to me is the 9042 feet of ascent, so it isn’t that flat! The other & more surprising to me, apart from the miserableness of other cyclists, is the poor quality of the internet. O2 could only offer GPRS throughout the trip except for a bit of 3G in the biggest cities. In the hotels speeds on WiFi were appalling every bit as bad as remote Cornwall. Staggering for a so called rich country famed for it’s engineering prowess.

My Strava for the day is here and pictures here