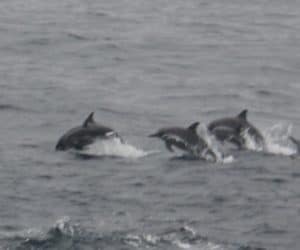 It was grey and drizzling again when I left the peace of Gayana Guest House to be confronted by the frenetic Tangalle literally a few yards around the corner. Quite a shock that early in the morning.

The road went alongside the sea and it was great to see the palm fringed beaches. I kept making little detours from the road down narrow lanes with incredibly steep hills, a bit like Cornwall riding. At Horseshoe Bay I was watching the locals surfing when a guy sidled up to me and asked if I enjoyed Sri Lanka – he then proceeded to tell me if I bought some land I could become a citizen 🙂 must say it has its attractions 🙂 I wished him well and tried to bike up the incredibly steep hill! At least his land wouldn’t be affected by tsunami flooding.

At the lovely named Noonnawella beach I met these three lads one of whom was wearing a great cycling T shirt saying 1947 L Alpe d’Huez very appropriate for me. 🙂

Eventually I came to Dondra and the lighthouse marking the southern most point of the island. No fancy spot to take a photo 🙁 I ended up going through some guys garden to get to the rocks so I could get a decent pic of the bike and lighthouse. Disappointing compared to San Pedro.

I retuned to the village and it’s huge statue of the Buddha and continued onto the main road past the huge beach at Gunawardena and across the river eventually arriving in Mirissa. I saw a good looking hotel and so went to enquire to be told by a very snooty lady they had no vacancies intrigued I left and checked on booking.com to find they had loads of vacancies! Not worth paying £250 though to see the look on her face 🙂

I continued down to the harbour and all the whale viewing boats. On the way I spied The Club Mirissa with its cabanas in a huge garden and only £16 per night 🙂 I booked in for two nights and the whale viewing trip the next morning.

In the evening the lady at Club Mirissa arranged for me to have a 90 minute massage at Badora Spa definitely not a relaxing Sally massage! He pummelled my legs and found all the pain points, suddenly I remembered my stab wound in the left thigh (I was stabbed at school when I was 13/14).  Another time I suddenly sat upright. Did it do any good time will tell I guess. One thing for sure – he needs a table with a hole for my head 🙁

Loading the bike up I discovered the bar bag rain cover was missing, couldn’t find it in the room so assumed it went AWOL fortunately the drizzle had eased of so it was merely damp now. Then it was straight up the  clover leaf ramp and onto the dual carriageway bypass, pretty much deserted.

Last night I planned a route up into the various lakes. However due to the paucity of bridges across the various rivers it meant coming back down to the coast road. So with the poor weather I stuck to Plan A, staying on the coast road!

At one point I thought I would go down one of the beach roads to see if I could actually follow the beach, bit of a mistake, apart from seeing the folks buying the catch of the day from a boat all I managed was pushing the bike through cacti and other prickly plants. Fortunately I didn’t get a puncture 🙂

Back on the road I came across the pretty amazing Agro-Technology Park at Bata Atha thinking how great it would be if PHH would suddenly appear and guide me round. But for me the most stunning thing was a gateway of two clasped hands totally made from header bricks! Just incredible 😉 and a testimony to the skill of bricklayers.

I eventually arrived in Tangalla and remembered the book RIDES AROUND SRI LANKA  by RICHARD COOKE  which I had read on the plane over here where he mentioned the Gayana Guest House. Maps.me showed it in the wrong place (now corrected by me). When I arrived I showed the staff the picture from the book and they instantly recognised the folks in it.

Unpacking my bag I found the bar bag cover right at the bottom!

A lazy start to the day leaving Wild Tusker Resort just before 8am after having my two fried egg sandwiches and mango juice for breakfast. I came away feeling robbed, I’m sure I paid for my dinner when paying the owner last night. 🙁

I decided to bike to the gates at Yala National Park knowing I would return the same way. It was a pleasant ride thinking myself lucky not to be in one of the viewing 4WD vehicles bombing along. I had a chat with the gatekeepers and felt sure I could have hopped on one of the vehicles entering the park, but couldn’t be bothered so pedalled back and getting rewarded with a good photo of an elephant, it seemed to notice me so I quietly pedalled away.

After Kirinda town I disappeared down meandering country lanes on unbelievably quiet roads, I don’t think I saw any vehicles except for a couple of motorbikes 🙂 No sea views though until I came into the busy town of Hambantota after having another big pot of curd this time with some disgusting honey substitute 🙁 but it was cheap.

I spent time looking around the town and found another Dialog shop so I went in to find out why my SIM still wasn’t working. Turns out yesterdays payment went onto a different number 🙁 and of cause that was just unlucky since I didn’t have a receipt 🙁 Good job the amount was only £2 or so. So today I splashed out £5 to get 8GB day data plus 7GB night data and of course I made her give me a receipt 🙂

By the time I got turned away from entering the docks and finding my way onto the road past all the houses about to be demolished (tp close to the water I think),  I decided to call it a day and so I’m now at The Samren Hotel. Which is relatively cheap and cheerful.

Todays 48 mile Strava is here and todays pics are here