My final day on the 4 rivers and what an amazing finish it was!

I started off at 8am which was a bit early for the Korean bakeries 🙁 so I made do with a few rolls and other bread bits then proceeded to do an 8km loop onto the other side of the river. Only to discover that the concrete bridge near theAdellia has a cycleway on it 🙁

I sped alongside the river with a decent wind behind me to the first registration stamp box and said hi to a group of MTB’s wearing the customary face masks, I felt almost naked in my shirt & shorts 🙂 Just after Sisalli there was one of the dreaded steep climbs straight upto 300 feet 🙁  then it was a turn to the south and straight into a big head wind! There was one small stretch on a busy road with no cycle way, the first yet! but soon a concrete path appeared. Once again there were no cafes. At the old bridge in Samrang I at last found a cafe! 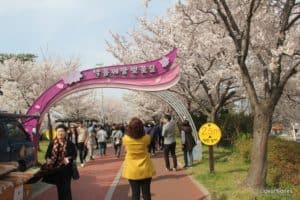 The last few miles coming into Busan were stupendous, magical with all the cherry blossoms in full flower making a canopy over the whole cycleway, it was crazy with pedestrians and everyone taking selfies etc for several miles. So I timed my trip to Korea perfectly 🙂

At the end of the trail, I took my cycling road tour passport in to get my certificate. The guy kindly filled in my missing stamps 🙂 to get the substantial medal and certificate snail mailed to me in the UK cost 32,000 WON for the postage etc.

I really do have to give tremendous kudos to K-Water for constructing the awesome cycleway and also the idea of having a passport etc. It’s certainly a notable forward-looking achievement for Korea. Given the obese nature of many of the young kids over here probably, a very good idea.

Since it was only 4pm I thought I would try and get on the ferry so maps.me gave me a route to the port. Strange to be on normal roads again, It was a hell of a ride with a monster steep hill upto over 400ft  and used as a rat run by the local taxis – I’m convinced my fate will be sealed by a mad taxi driver! Then it was through a long tunnel along a very narrow pavement – the wind behind me was so strong I ended up braking all the way through it. Out the other side it was then trough a tunnel under the rail tracks (lots of rough sleepers here) the other side it was a mad dash across 12 or so lanes of traffic. Strava says I rode 69.5 miles

The terminal itself is very efficient I just put the bike in the lift upto the third floor and bought a ticket. 10,000 fo the bike and either 90,000 to share a cabin or 150,000 for your own cabin 🙂 The cabins are very pokey with only a basin & no WiFi 🙁 Nothing like the Harwich Stena lines ferries.

I nade the silly mistake of getting rid of all my WON, so on the ship I was cashless 🙁 and yes they only accept YEN cash! (They will convert WON notes to YEN). Fortunately a UK guy who used to live in Mill Road but now lives in Sydney 🙂 befriended me and gave me a beer! Many thanks if you are reading this 🙂  Given the 250 school kids on board I just went to bed with no dinner sleeping like a log!

The pictures of the day are here

So goodbye Korea many thanks to Scott & Laura, Tim & Viv for the evenings out and sorry I dashed off at the end 🙁

Well, I was totally wrong about reaching the end of the trail today! It turns out the river twists and turns a lot more than I thought so it’s more like 200 km to Busan 🙂

I set off before 8 as it was such a beautiful morning. I stopped for a very inadequate breakfast at the 7-11 and rode on. thinking there would be plenty of places to stoke up en-route. I was wrong again 🙁 It was well over 4 hours before I found a workmen’s restaurant at Ssang-yonghausikbupe. I was starving.

Another error was thinking it was going to be flat 🙁 Wrong again I had 4 peaks of over 400 feet to get up all of them with evil ascents in the 20% and above range.

But in the end, I made it to Namjiri pretty wrecked after biking nearly 63 miles and with 2,928 feet of ascent (more than the so-called hilly day). The Motel Adellia  is an aged version of last nights place but OK except for the internet which is rubbish.

The pictures are here and Strava here

What follows below is to help other English speaking riders on this difficult stage;-

I woke to thick mist over the river but every sign it was going to be a great day. I wasn’t as starving as I thought I would be after my two fried eggs and small bowl of rice for dinner. Well it is a big beef growing area 🙁 It’s really surprising how local meat products are in Korea).

I was quickly away popping into town for some bread goodies and a choccy bar with a bottle of coffee, surprisingly tasty 🙂 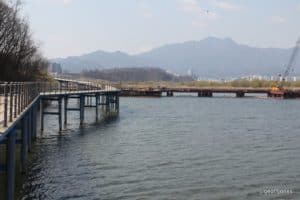 The cycleway is virtually 100% of the way, beautifully smooth with lots of boardwalks on stilts in the river going around the headlands instead of up and over – much easier biking. A minor problem was a lack of cafes although once I got to Gumi there was a street market of food vans, they insisted on selling a minimum of 3 sweetcorns 🙁 just like the shops will only sell you 4 bananas!  Crossing the river in Simi Dong I found a real cafe 🙂 the sun was getting hot so I exposed my legs and arms to the sun for the rest of the day.

Approaching Daegu I took the magnificent boardwalk along the river, with a few hundred other folks too 🙂 at the crossing it was amazing to see a whole panoply of battery devices from Segway knock offs,  battery driven scooters with huge tyres etc etc a real holiday atmosphere.

I couldn’t face going into the huge town and I was getting on so well, I just love biking in the sun 🙂 so I skipped the town and kept on the opposite bank. At the huge bridge with a narrow cycleway I stupidly kept following the 4 River signs which were obviously for folks wanting to go in the city! So I turned the maps on and did a nice loop back to the correct direction!

The stress of that and seeing a long empty path ahead with over 90km on the clock made me turn off to find a motel in Oxpomyeon. I saw the modern looking Motel Inus which is good, next to a 7-11 and dumpling shop 🙂 I was a bit worried about the lack of a restaurant but I followed the vast queue of cars going down the cherry tree blossom road and lo and behold there was a huge fair underway with one of the stalls selling vegetable pancakes & beer 🙂 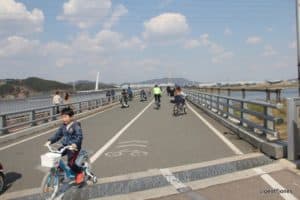 Strava says I did 57.7 miles at a good speed of 11.3mph which with all the photo stops is good (OK I had the wind behind me most of the time). Tomorrow could be the end of the trail in Busan! 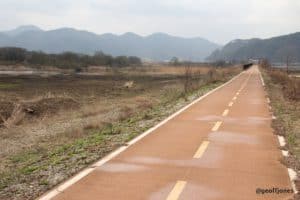 It was a stay or should I go start to the day 🙁 the rain started to clear so I thought I should go. I’m finding it hard to know how long to stay in Korea as I’ve no idea how long it will take to bike upto Tokyo once I arrive in Japan from Busan.

The added incentive today was to visit the Sangju Bicycle Museum an idea floated by Scott & Laura so at 10.30 I said my farewells to Vic & Tim in one of the lovely patisseries that seem to excel in Jeomchondong and set off on the cycleway.\

The first 24km was a beautiful custom made cycleway at one of the certification stamp places I chatted to a Korean guy with an enormous iPad strapped to his handlebars been used for navigation etc. A bit of overkill I thought 🙂

Just after 24km the route goes onto an inclined boardwalk then does an 180-deg turn with a set of steps on the corner, which I think if you can lug your bike OK probably;y best to use! as the boardwalk then turns into a concrete road with a 30-degree incline for some distance 🙁 a little bit tough to push a laden bike up.

At the top, I still couldn’t find any mention of the museum on any of my maps in English so thinking it had Sangju in its name that’s where I headed off to – BAD DECISION In Sangju still no luck. In the end, I asked a student who took me to the library where I discovered the museum was a few hundred yards further on from where I left the 4 Rivers Trail 🙁 🙁

Once at the museum I quickly updated Open Street Map to show the museum position in English 🙂 so anyone using maps.me etc etc will easily find it.

The museum itself is very spacious and grand with outdoor & indoor biking activities for kids. The exhibits are OK but almost 100% Korean as is all the explanatory text. Whilst there I bumped into Scott  & Laura who had found it more conventionally. We agreed to meet up in Nakdongni the path once again became quite hilly and I finally made it in the pouring rain in just over a hour.

The Motel known by its number 3F is OK, my cheapest place yet! and even has a full length towel, the first in Korea 🙂 Eating out was a big disappointment for me as this is a big beef growing area. I eventually had two eggs a bit of rice and some beer.