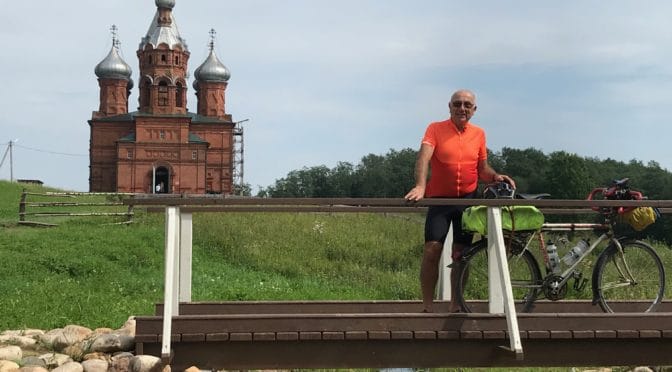 On my 71st birthday I was up bright and early ready to start the journey to The Volga’s source, , having slept OK despite how busy the Russian rail network was below me.

Nowhere was open for breakfast at 5.30 so I made do with a crust of bread in my bag hoping to get more breakfast in Ostashkov.

The train slowly rocked and rolled onwards after the first couple of stations I extricated myself to a pair of seats that had been vacated and later took the bike to near the exit and started to reassemble it, we eventually arrived In Ostashkov which I was surprised to find was the terminus so I had to patiently wait for the whole carriage to clamber off the train 🙁

It was now getting quite late for starting such a long ride but I found the local supermarket and far to hastily bought nowhere near enough food for the day, especially without my usual eggy breakfast, the first hotel I saw said they were full tonight so I rushed on carrying all my belongings with me knowing full well that I had to return in the evening 🙁

The road proved of better quality than I thought so I sped along even finding a hotel on booking.com for the night which sounded great. All was going well untill the junction at Svapushche at 31 mile’s into the ride when the road descended into a corrugated sandy track for the last 15 miles 🙁 awful riding. Eventually after 4 hours of riding I made it to the source of the Volga

The source has a small hut over it and you can look down into the spring the whole area is quite bucolic especially with the domed church overlooking the small stream well worth all the trouble and expense of getting here.

Alas there was no food only some guy selling ice cream and some home made cloudy drink which I eagerly drank as i had run out of water.

So back down the dreaded sand road I went with the 4X4’s throwing up vast clouds of dust as they charged to & fro my rear gear changer finally gave up the ghost refusing to budge in any meaningful manner, the bike is finally breaking up on me 🙁

I made it back to Ostashkov first at the supermarket and then onto the Lubov Hotel with its magnificent lake setting feeling totally wrecked. I eventually found a bar open and had some pretty disgusting fish and chips.

In the night I became very ill with food poisoning throwing up my total stomach contents, not a good ending to my 71st birthday.