I apologise to my regular readers for the brief hiatus due mainly to me feeling distinctly unwell sneezing, producing voluminous mucus & feeling tired, I was going to have a rest day in Hiroshima today but I fell out with the hotel I booked (they wouldn’t store the bike) and the hotel I did stay in, The Dormy Inn, could only accommodate me for one night 🙁 so despite the rain I biked the 24 miles to the brand new Hotel Route Inn in Higashi

The ride from Hof to Miyajima was a long 64 miles and the most climbing yet of this trip 3,054 feet it was a day without rain but equally, no sun could be seen. Been Sunday everywhere was very quiet with only the major stores open later. The worst part of the day was having to ride through two long tunnels (well over 1km each). The traffic noise is deafening and with nowhere to escape constant stress with cars behind you trying to overtake. Thank goodness it wasn’t a weekday with all the huge trucks.

I started to get worried about the lack of hotel sightings 🙁  This is the problem going on minor roads – you miss the cafes & hotels. However, maps.me came to the rescue and found me the Guesthouse in Miyajima run by a totally OCD couple, the room was typically Japanese (rather than Western like the main hotels) all was OK until I turned the AC on to dry my clothes when suddenly the room filled up with stale cigarette smoke 🙁 🙁 It’s surprising that countries still allow smoking in bedrooms. Miyajima is the ferry gateway to one of the islands so it was full of fellow westerners. 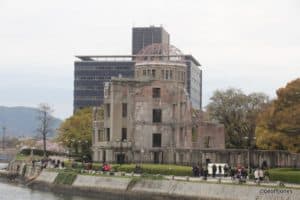 Monday was a short ride into Hiroshima itself. Not a lot to say for such a grotesque event, The memorial gardens are well maintained as is the dome that survived almost under the bomb. No mention of any residual radiation from the U235 used in the bomb even though it has a half-life of 700 million years. I would love to have a Geiger counter for my iPhone 🙂 The central town itself has been converted for the use of cars! the main street has 8 lanes plus the tram so not particularly good for shopping or looking around. The Dormy Inn was OK but it’s a bit claustrophobic sleeping in a room with no window. The weirdest thing about the city is that the pavements bounce up and down because it’s all built on a marsh (the river delta).

Waking up today feeling awful I just wanted to stay in bed 🙁 However, the hotel only had a super expensive room available and not ready to 3pm so I decided to face the rain and move on to pastures new away from Hiroshima and its motorway mania.

One of the biggest problems with riding in Japan are the crossroads (intersections) all controlled by old-fashioned timed traffic lights. so everything just stops and waits an indeterminable time and of course, no one but no one moves, frustrating in the extreme and makes for slow progress. The other factor is having to ride on pavements bumping up and down all the time and trying to avoid kids etc. So slow progress in built up areas, of which there are a lot! Today I managed to get a section on a path in the flood zone of the river – just like Korea for 5 miles 🙂 The rain kept on although surprisingly it no longer affect me as much getting wet, it’s just it upsets the navigation on the poor iPhone7, the app really needs a way of turning the touch screen off when riding in water.

I couldn’t resist the stunning new Hotel Route Inn super friendly staff and very reasonable rates for a really comfortable place. I had my first sushi and tempura on this trip, It brought back so many memories of eating out with the Olympus Japanese guys in NYC and Long Island 🙂 except this time I had to pay 🙁