Today was a feast of Hindu Temples and seeing the mindless destruction of the civil war coupled to a visit of Sri Lanka’s northern most point.

I didn’t leave Old Park Villa until well after 8am due to the dilatory nature of the staff. I don’t think they are used to folks wanting to dash off. Amazingly the route I had planned took me straight past the stunning Nallur Kandawamy Kovil, so impressive I stopped and went inside after been made to take shirt and shoes off! 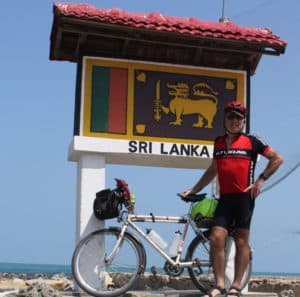 The route then took me past at least 10 more temples plus some pleasant fishing villages some still with tsunami damage others blown up in the war! I suspect there will be aland grab going on soon for all the empty plots overlooking the ocean, I eventually made it to the northern most part of Sri Lanka, Point Pedro. Did my selfie then moved on as not a lot there.

I started heading south the wanton destruction everywhere, whole villages blown up and flattened. I came across the HALO mine clearance encampment, what a job! they’ve cleared tens of thousands of them but still 100s of thousands more. Staggering. Apparentlt it was like WW1 with trenches, barbed wire everywhere.

I made it to Kilinochchi and stayed at the first hotel AKR basic but OK. Walking through the town later I came across the blown up water tower, now a memorial, one of the last acts before the town was taken by the south. It reminded me of my Danube trip and Vukovar shot up water tower left as a memorial.