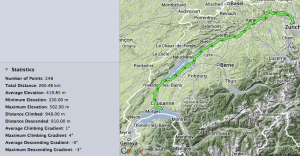 One of the annoyances on the ride down to Les Gets from Cambridge was that at every cafe stop (of which there were many)  I had to struggle to disengage the GPS & iPhone from their handlebar mounts plus the iPhone couldn’t be used in landscape mode due to there been no space left on the handlebars.

So on the way I was thinking of schemes to overcome the problem. If  somehow I could attach the GPS & iPhone to my Altura Dryline Bar Bag then with one click of the Klickfix quick release I could remove the Altura bar bag, GPS & iPhone in one swift easy movement and head straight to the cafe with all my valuables.

Obviously any system shouldn’t affect the bag water proofing, map case use or ease of access to the bag for taking quick shots with my camera.

As all good design the answer was cheap & simple 🙂 Take an old aluminium broom handle from the scrap bin. Hacksaw it to the right length, then crunch the ends into a flat using a vice, bend to right angles (very slowly & carefully). Put a hole in each end then attach to the sides of the Altura lid using penny washers and M4 bolts.

The map case slides underneath allowing space for The Bikeline books, even better the broom handle bar keeps the map case  firmly in place.

The Topeak iPhone 5 case fits perfectly and can be used in landscape or portrait mode and as a bonus can have the power cable in place with the auxiliary battery pack in the Altura bar bag. (Use an IKEA plastic bag clip to hold the cable in place and seal the iPhone in anything but the worst conditions.). The Garmin handlebar mount fits on well. 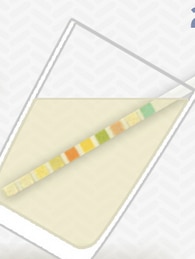 Very interesting email I received on one of my favourite topics. If you measure what is going in it strikes me what is coming out is equally important.
After all doctors used to taste your urine 🙂 It’s interesting how the FDA are getting drawn into the debate. Basically if you interept the dipstick manually it’s OK once you use a camera & computer it becomes a medical device! see here.
———————–email from uchek——————
After our US and India app releases, it has been an interested time!
– Lots of downloads of the uChek app on iPhone in USA and India
– ALL our friends on the Android platform and in non-US, non-India geographies writing to ask “When will we get it?“
(btw Answer: SOON!
We’re be sending an update on release in different geographies, and of course, the much anticipated Android app)
Also interesting development: uChek is a FDA registered device and we have been in discussions with the regulator about the classification of the product. Much commentary about this on the web. Like here.
We seem to be somehow in the center of a wider debate about innovation and regulation.
Another thing we’ve noticed – nobody on facebook wants to talk about urine using their real name 🙂
So we’ll use this email to talk about urinalysis, and what information the results of a urine test may contain …
A simple 10 parameter dipstick (less than 20 cents) can be a powerful diagnostic tool. This is precise the type of test strip we read using the uChek app, through the iPhone’s camera.
Such a standard urine test strip may comprise up to 10 different chemical pads or reagents which react and hence change color when immersed in, and then removed from, a urine sample. The readings can be obtained between 60 and 120 seconds of dipping. Each parameter has to be read at a specific time after the start of the reaction, as per the manufacturer’s instructions. There are many manufacturers and many types of strips. Information about concentration measurements of parameters like glucose, urobilinogen, pH, ketone, occult blood, protein, bilirubin, nitrite, leukocyte, and specific gravity in urine may be obtained in this way.

The absence or relative concentration of different parameters may provide inputs for healthcare professionals for diagnosis, and management of upto 25 medical conditions.

Produced as a by-product during the degradation of RBC in the liver and normally excreted in the bile. Once in the intestine it is excreted in the faeces (as stercobilin) or by the kidneys (as urobilinogen).
Presence of bilirubin in the urine may therefore indicate:

Not normally found in the urine, ketones are produced during fat metabolism.
Presence of ketones may indicate:

The specific gravity (SG) of urine signifies the concentration of dissolved solutes and reflects the effectiveness of the renal tubules to concentrate it ( when the body needs to conserve fluid). If there were no solutes present the urines SG would be 1.000, the same as pure water.
The SG of urine is around 1.010 but can vary greatly:

Decreased SG may be due to:

Increased SG may be due to:

It also reflects a high solute concentration which may be from glucose (diabetes or IV glucose) or protein.

Classified as microscopic or macroscopic haematoria. Microscopic means that the blood is not visible with the naked eye.
Blood may be present in the urine following trauma, smoking, infection, renal calculi or strenuous exercise.

It may also be present with:

The presence of myoglobin (myoglobinuria) after muscle injury will also cause the reagent strip to indicate blood.

Measures the hydrogen ion concentration of the urine.
It is important that a fresh sample be used as urine becomes more alkaline over time as bacteria convert urea to ammonia (which is very alkaline).
Urine is normally acidic but its normal pH ranges from 4.5 to 8.

This is measuring the amount of albumin in the urine. Normally there should be no detectable quantities.
Elevated protein levels are known as proteinuria. Albumin is one of the smaller protiens, and if the kidneys begin to dysfuncion it may show an early sign of kidney disease.

Other conditions which may lead to protein in the urine include:

Normally present in the urine in small quantity. Less than 1% of urobilinogen is passed by the kidneys the remainder is excreted in the faeces or transported back to the liver and converted into bile.

Raised levels may be due to:

Nitrites are formed by the breakdown of urinary nitrates. This us usually caused by Gram-negative and some Gram-positive bacteria.
So the presence of nitrites suggests bacterial infection such as E.coli, Staphylococcus and Klebsiella.
Commonly found during a urinary tract infection.

Detects white cells in the urine (pyuria) which is associated with urinary tract infection.

Urinalysis may be useful in investigations and management of the following conditions.

Last saturday Sally and I did the Yorkshire Three Peaks walk. A great walk it was too, especially tagging along behind two members of the LDWA who specialise in 100mile non stop walks. So we moved had a brisker pace and had fewer shorter stops than we are accustomed to with The Cambridge Rambling Club 🙂 The weather was very low cloud with 12″ or so of freshish snow on all three peaks.

The gadgets I was carrying where an iPhone5 with the Moves app running & the route in the Viewranger app (although not tracking). I also had the route stored in my Garmin etrex 20 which was also storing our track as we walked it. Finally I was wearing my trusty Fitbit Ultra.

I’m pleased to say they all worked flawlessly and all their batteries stayed live for the 11 or so hours we were out. I was also carrying my Canon 550D with a 18-135mm lens.

This is a very nifty app that automatically works out if you are walking, cycling or just sat in a vehicle! It works by using the internal GPS (battery only lasts a few hours) and also the various internal motion sensors. At the end of the day it produces a summary and storyline (see left image). For this walk (and to and froing  before & after) it gave a result of 58,499 steps, 25.7 miles in 10hours 29mins. You can also see the times we summited and the little stops we had.

I now use this app everyday the biggest disadvantage (apart from battery life – which to me is OKish)is that you cannot easily create a database of activity. 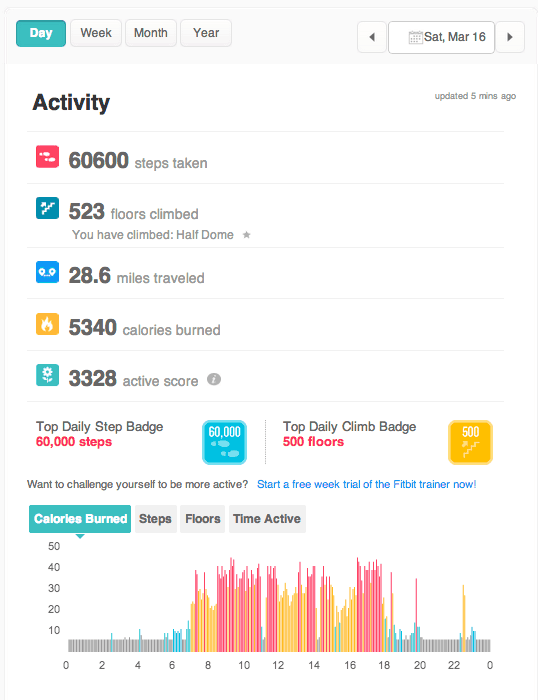 As anyone knows both Sally and I are obsessed with this amazing device.

Using Ascent OSX app we get the profile and speed as: 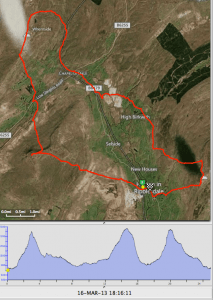 This worked out we had walked 24.8 miles in a moving time of 8hr 45min (average speed 2.8mph) with an ascent of 5,579 feet. So the other devices had a pretty good correlation. So the Fitbit really does work 🙂

All my photos of the days walk can be found here.