After yesterdays tough ride from Silistra on the Bulgarian)Romanian border I decided to take a day out and luxuriate in mv somewhat  faded 5 star accommodation.

I managed to get the data sorted with Vodafone on my iPhone, I think it broke because I tried calling the UK on my Romanian number. This wasn’t allowed so basically I lost my data plan.  £9 later I walked out with another 1GB of data all working.

I went into a few travel agents, but they all laughed and thought I was nuts wanting to return to Budapest on a boat 🙁 The town itself is one hell of a mess with all the pavements torn up whilst they are laying miles of ducting for cables, interestingly using masses of labour rather than diggers. Took a lot of effort to find a coffee shop but worth the wait to find Zoomserie and it’s yummy ice cream & pleasant staff after a haircut it was back to the hotel.

In the afternoon I took myself of to the docks & Pier 31,the grain terminal. Fascinating to see the huge queue of trucks waiting to unload the corn  alongside  the hundreds of rusting, disbanded railway wagons. I spoke to the manager who rang the shipping company but it was all no can do. I pottered off to the ships that were loading corn up. One was off to Izmir, i suspect if I had $150 to thrust in his palm I could have had a lift, but didn’t fancy Turkey just yet. The other boat was of to Pakistan. It’s interesting and I feel you can travel this way but you need hard cash in your pocket & your stuff with you. Another time maybe…

So basically there seems to be no straight forward way to get a  boat back up The Danube from Constanta. Tomorrow I continue  to find The Danube,

Some pictures of the day are here. 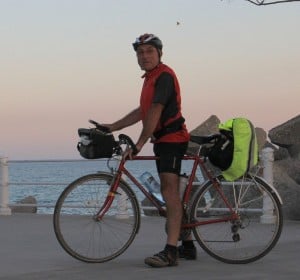 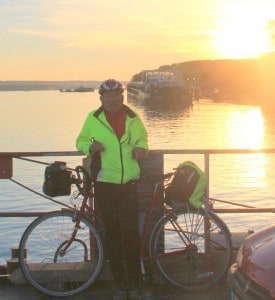 Another grand day out and I’m pleased to say someone gave the truckers a day of! Perhaps they were attending all the weddings going on in the various villages I went through. No gales today just a pleasant light breeze although I still clocked up over 13mph for the 90+ miles I biked.

The road was in good condition and I sensed that this area is slightly more prosperous, I even found a decent ¨western¨cafe in Zimnicea, although still no sandwiches but at least decent coffee & pastries 🙂 (There is also what looks like a  modern hotel there too if you want to bike 50miles).

The scenery is quite fen like with lots of real free range ducks & turkey’s plus hundreds of square miles of good arable land.

Only a few glimpses of The Danube once I left the hotel. In Giurgiu I eventually came across The Hotel Sud, even though I biked around the old centre (yes it has an old centre!) it’s the only place I could find.  Bit pricey especially with a blocked smelly shower & electrics that have to be rest at the consumer unit. AroundMe seems to have given up in Romania, today it was telling me to go to Bucharest!

Here is today’s Strava and pictures.