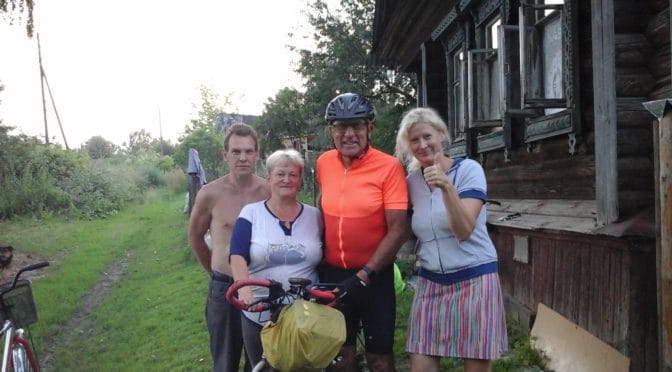 I awoke to a dismal looking sky and a breakfast that appeared in fit & starts but which turned out OK in the end which is more than can be said for the weather. The rain started shortly after leaving and with the head wind made me leave the plotted route, even though it looked downhill, and go too Yuryevets. A poor choice as the Volga has a meander for a reason – a hill it wisely chooses to go around! As soon as I dropped down into Yuryevets I regretted it, a dismal forgotten poor town reminding me of Creswell in the 50’s with its hotel in much the same condition.

It was still early the weather was improving and so I quickly left to go to Puchezh which appeared to have an hotel. I found the first floor hotel but I declined both 6 bedded dorm type rooms and the one toilet as I thought I could still make it too Chkalovsk in the light and it was turning into a fine evening with much less traffic.

All went well until I took the ‘short’cut on the last 8km to the village which quickly turned into a rutted puddle laden track and then across a field, a loud bang and the front tyre squirted slime everywhere and deflated as much as me 🙁 first puncture in several thousand miles of touring 🙁 as I hit a buried metal flange.

The dog yapping away bought it’s owner out who then kindly proceeded to try and fix the puncture with his wife & kids looking on trying to communicate with me. In the end I had to resort to using my spare tube. The young lad was then sent to guide me to the bridge & hotel. I ended up losing him in the village. But great to meet such warm friendly folks 🙂

I eventually found the hotel after 9pm in the dark, close to a bright new SPAR where I could change my big note and buy some sustenance.

A very long day of over 100 miles ridden on a big breakfast & a bag of sweets.