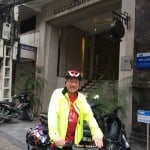 oday with a lot of trepidation I set off at 9.15am  from the Hanoi Moment Hotel to start my bike ride to Singapore 🙂 The hotel was in fact not as good as their new Hotel Moment 2, but the difference is marginal, basically the mattress was worn and there was no breakfast buffet, everything has to be ordered and the pastries are missing 🙁

My big concern, as always, was could I find anywhere to sleep, especially as I wanted to deviate from Daves route by taking the Ho Chi Minh road.  I navigated easily out of Hanoi using the route I had loaded into the Gaia app, the weather was wet and very overcast but plenty warm enough for me. Traffic wasn’t to bad to begin with although later in the day it became fast with heavy trucks near the quarries & brickworks. The express buses are a pain too 🙁 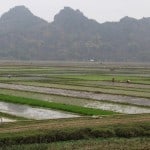 At Xula Mai I took the plunge ,after an awful cup of tea (she let me have it for free) and I disappeared down the Ho Chi Minh road  with it’s fast heavy traffic but fantastic views of karst mountains (and even places selling huge chunks of naturally sculpted rock), rice fields & a few very old houses. I tried another cafe, this time it was  a thick Italian style bitter coffee ugh! A couple of drunks in the cafe accosted me but I pretended not to understand their begging motions.

Later I found a very friendly roadside place selling sesame doughy balls & fresh bread yummy and I stuck to a Sprite! whilst Facetiming Sally to show her the country delights.

At the start of the first 10% hill I stopped to check the map, a guy on his scooter stopped & seemed friendly at first. However, he then pointed to the rear seat of his scooter I shook my head & rode off, on the hill he came alongside and once again pointed to the seat, I rode on. He zoomed up the road stopped and when I arrived reached out to grab me, I swerved & engaged full power swearing at him. He once again zoomed off, this time he walked out into the road wielding a large metal object, I pointed the bike at him and cursed him VERY LOUDLY he leapt out of the way! Fortunately by this time I was near the top and he obviously gave up. In 5000+ miles of biking abroad the worst experience yet. Even beating the snarling Romanian dogs chasing me.

I finally worked out the magic Vietnamese word is Na Nghi (well it looks like night to a dyslexic) for a guest house, so for 250,000 dong (£7.22) I have a lovely room & hard bed in the Hoa Lu on the outskirts of  Hang Tram, which Dave passed on his third day. After discussion using Google translate I found the restaurant was in the village a 5 minute bike ride away, in the rain. On the way back my left pedal dropped off 🙁 now here is the  really nice bit about Vietnam, within one minute I was been escorted by a woman and her kid across the road to a guys house with a workshop in his front room! 2 minutes later I was on my way with a crowd of folks shaking hands & waving.

So a good ending to the day. Strava says I’ve done 65 miles at an average of 12mph which is really good considering the traffic and the headwind for most of the day. 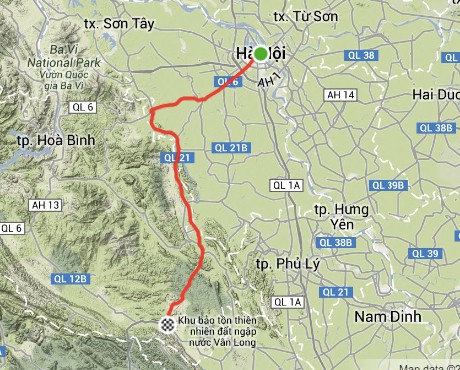 All the photos are here a weird thing about the Wifi is that I cannot get on Twitter or Facebook but the 3G signal allows it..