I managed to present my little talk at the Motor Industry Public Affairs Association. About 28 folks there split 50/50 so no sex bias in PR. It was well received although I don’t think many of those present were totally convinced! Heather had set up the meeting well, initially in a horseshoe format then dividing up into 3 breakout groups. I was amazed at just how blinkered corporate types are. It really hit home to me all that De Bono stuff about thinking outside of the box. I began to think that PR stands for press relations rather than public relations. For most of the people present its all about controlling the message. 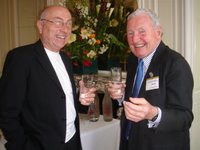 However, one person who was totally convinced is my childhood hero, Paddy Hopkirk who was in my breakout group. Amazing happy friendly fellow who was telling me a story about his old friend Bob Lutz who was considered very mad for daring to ask common people at autoshows what they thought of his cars. Oh for those that don’t know Bob is General Motors Vice Chairman and was one of the first CEO’s to blog!

Here is Paddy taking a mini for a spin…