On Tuesday I left Pinar del Rio and managed to bike the 82 miles to La Bajada on the western tip of the island overlooking Cancun in Mexico. So I now have biked the length of the island from the South eastern corner at Baracoa to the North Western corner. For the pedants I know Baracoa is about 20 miles down an unmade track from the actual tip and that La Bajada is a similar distance down a track from the North Western corner.

I left Pinar del Rio Hostal with a business card from it’s owner for the Mercedes Motel in Manuel Lazo. The road was mainly quite good although in the tobacco fields it was planting season so probably not the best time of the year to appreciate tobacco plantations 🙁 although interesting to see the various way that oxen are used in tilling the land.

I arrived in Manuel Lazo to find the so called ‘Motel’ was down a dusty track of an equally bad track. The building was a shack with my proposed room been a windowless bedroom of another bedroom. I drank a beer, mulled it over, and then made my excuses and departed with all haste.

It was another 20 miles down a deserted road through a National Forest a bird watchers paradise, before it suddenly opened up to the sea and beach. A group of ladies nabbed me and took me to a homestay, at least this room had a window, all be it with cardboard shutters and a shower which was a pipe hanging out of the wall.

I pretty well had no choice but to stay, having biked 82 miles 🙁 apparently the area was devastated in the 2005 hurricane although probably it wasn’t much even then! To make up for the lack of amenities the sunset over the ocean was excellent though 🙂

Dinner was served in a neighbouring shack after the generator came on so we had light! (it turned of at 4am). The neighbour said a bus left at 6.20 in the morning. So I arranged brekkie for 5.30am in the pitch black, thank goodness for the bike light 🙂

There was much confusion in the morning about the bus so I just pedalled of in the dark! 3 hours and 41 miles later no bus ever came past me! In Isabel Rubio I found a 1950’s vintage taxi to share with a young Cuban couple. A fare of 8CUC was agreed for me and the bike to do the high speed 36 mile dash to Pinar 🙂 thus saving a good 4 hours of pedalling.

In Pinar I decided to pedal to the cigar and tourist capital of Vinales there was a lovely 400 foot real climb to get into The Vinales Valley with fantastic views to make a great ending to the day. To make it even better I discovered the La Berenjena vegetarian restaurant superb food and smoothies 🙂

After dinner and a Cuba Libre or 2 I treated myself to a manicure and pedicure for 10CUC . 🙂

Today is going to be a relaxing day before I get the bus to Havana in the morning for a weekend exploring the delights of the Capital City. My flight home is on Monday afternoon.

I’ve now biked 1,445 miles (2312Km) in the 28 days I’ve been away so far with 25 days in the saddle that’s about 58 miles per day 🙂 As you can see from the pic it’s just as well I’m stopping as my bike shorts are totally threadbare. The bike has held up well apart from the headstock clamping nut breaking and the rear brake pads wearing out.

Hopefully, once home I will get the pics up and geotagged.

After some thought I decided to get back to Havana along the Cuban motorway system it was about 6 miles further in distance but offers a much better ride.

I left Matanza on a very long slow climb but at least with motorway gradients you can always bike up, the road was pretty well deserted and at least the huge cars and buses can easily get pass as the road is at least two or three times wider than the standard ones so makes for a way more relaxing time.

I eventually reached the Puenta de Bacuna Yagua viaduct which came as a bit of shock when you suddenly find yourself hundreds of feet above the valley floor with a very low handrail indeed. Pretty amazing concrete construction built in 1959. Once across it there are a set of steps upto a viewing platform and tourist centre.

I stopped for an refresco in one of the huge roadside restaurants amusing to see the 5 piece Cuban band strike up when a tourist bus arrived. At one of the motorway hills I decided to do a detour and follow the coast road. True to form I ended up having to carry the bike and wading across a river by the beach where a hurricane had destroyed a bridge 🙁 I was ready for my prawn lunch by the sea after that!

Eventually I came to the Havana bypass which I followed around to get to the airport hostal and retrieve my tools and sort the bike out a bit. The amount of metalwork embedded in the tarmac is incredible an archaeologists dream in centuries to come. Motorway junctions are a bit of a nightmare and definitely not for the feint hearted. But I survived 🙂

At the hostal I gave the bike a wash to remove all the sand from my beach escapade, tightened the headstock and oiled the chain & gears.

The next day it was more motorway to get to Saroa. Since it was Sunday there was a huge local biking club out going into Havana. I had a huge wind behind me so made good time to Saroa. Saroa waterfall is nothing spectacular although it’s a steep hill to get to it and the local rip off boys want 3 CUC to get entry and ‘look after’ your bike. Whilst having a pee in the undergrowth some insect bit me down there, I made a hurried departure to my homestay, had a shower and lashings of anti-histamine cream.

Today (Monday 30th) I made another uneventful 50 miles on the motorway to Pinar del Rio the end of the motorway system. Tomorrow I will do the last leg of Cuba end to end by going to La Fe and the western most part of the island. I then want to explore The Vinales valley for a couple of days before getting the bus/train/taxi back to Havana. 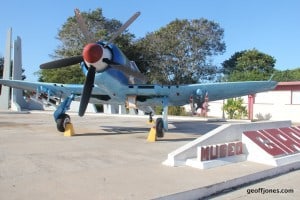