Whilst in Les Gets I learnt from Thierry that icicles are a sign of a poor roof or defective guttering. Today, Sally spotted this on MY house here in Cambridge. 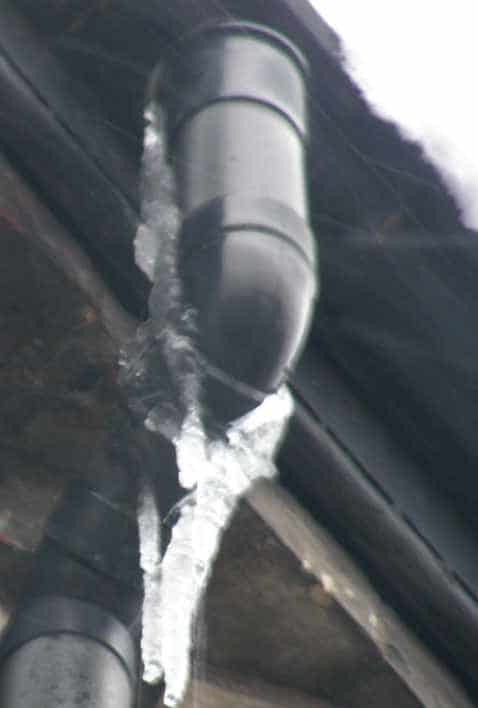 I guess it’s not in the same league as this though:- 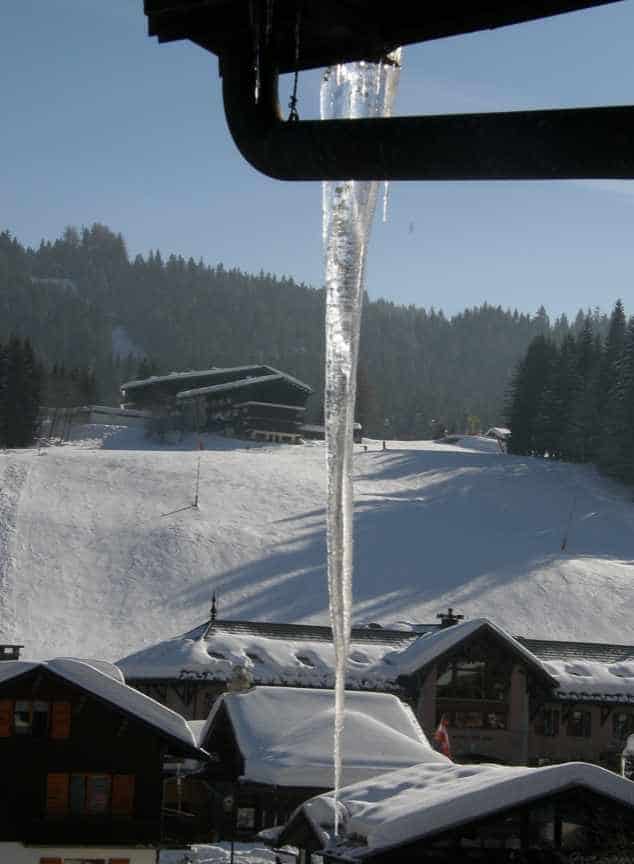 My friend George, his son Graham and friend Ian, arrived somewhat earlier than anticipated at 3.30am this morning 🙁

I met George when I was working at the Renishaw Iron Works in 1962. He was the assistant instructor to the redoubtable Fred Smith on the Duke of Edinburgh’s award scheme operated out of Parkgate Steel Works (both companies were owned by Tube Investments.

They had driven from Sheffield in 15 hours plus a 2 hour wait at the chunnel. George had a Eurotunnel frequent traveller deal were you can make 10 trips in a year for £390 so a pretty bargain crossing.

George being George meant he was up making tea at 7.30am and we were heading to the slopes at 9am (Matthew & Andrew take note 🙂 )

It was a glorious day on really excellent pistes here in Les Gets. We did 28.7miles in 3hr 16min + 2hr 30min of stops with a vertical descent of 3miles or so.

The trail and pics are here:

After yesterdays total wash out (Although I did spend the day transferring blogs to my account at webfaction and learning about host files in windows, including using the rather cool HostsMan programme).

It was great to wake up to a massive dump of snow (which killed the apartments power from 3am to 8am). Thierry reassured me that Mont Chery doesn’t do avalanches so you can guess who was the first in the bubble lift this morning 🙂 🙂

First ride was down the red chamois back to the village which was a bit easy, since it had been bashed earlier and the snow was only a few inches deep. So on my next trip in the bubble I met another snowboarder who suggested we went down off-piste underneath the bubble. After a couple of face plants with one of them had me disappearing underneath the fresh powder totally, I was beginning to wish I hadn’t bothered.

After some hot chocolate I did the black gazelle which was AWESOME, although by the end of the day it was totally churned

Afternoon was a few runs of the top of Mont Chery but the cloud level was low so visibility was not to good plus the ice was coming through the powder.

Here’s the pics and runs on Evertrail:-

Powder boarding day in Les Gets

Update: There was an avalanche on a more remote part of Mont Chery yesterday with 45 years old, Jean-Michel Delavay owner of a sport shop in Les Gets dying http://cli.gs/WyeQMS

Today has been glorious here in Les Gets, bright sunshine helping to offset the -8 degrees temperatures.
I took my board out for a 28mile ride going up 13 lifts totalling about 3 vertical miles of ascent 🙂 Top speed recorded on the GPS was 34.7mph. I felt really comfortable motoring along, either I’m getting better or the snow is real good. The LH K2 binding is still a bit of a struggle to clamp in – maybe I need more stretching exercises to get down there easier!

Here is the Everytrail and photos. :-

Boarding in Les Gets

Out here I’m using my old Toshiba Tablet So I’ve had to install GPicSync to geotag the pictures from my Olympus SP560UZ.