With all the information that Google has about me you would think they would know better than this:- 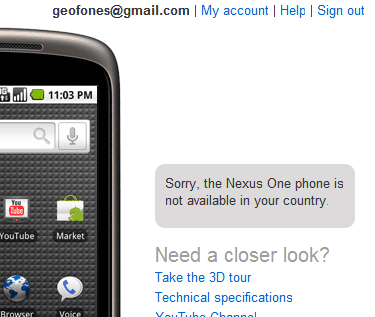 Obviously they only take in the fact that my computer is sitting on a French network rather than my Google account which shows my address/bank details etc are in the UK. All stupid really when I could easily spoof the network address with a VPN.

So much for local intelligence.

Spurred by reading this on CNET “he heard Google’s Marissa Mayer whisper that in these times of infinite woe, more people were googling “recipes” than “restaurants.” I thought I would give it a try using Google Trends, and for the UK it seems correct:- After reading the excellent post “Overnight success takes a long time” by Paul Buchheit on the history of gmail it stirred my memory into why I use gmail. The answer is this prominent  button:

Before gmail came along. Spam was a real problem for me, as you can see from the last  10 MINUTES worth hitting the gmail spam filter.

and its totally relentless, a 10 minute snapshot any time day or night is the same!

So full marks to Google for letting me use gmail on all my email accounts and also to be able to access them by IMAP and POP so I can read them on my iPhone and Thunderbird.

Oh and I’m sure FriendFeed will eventually be a huge success! Follow me there as geofones.

Interesting talk by Andy Hopper tonight on Computing the future.

I especially liked his comments on setting projects for his PhD students. they have to be more advanced than what Google or Microsoft are doing but not totally science fiction stuff – A hard job these days I reckon.

Other interesting points was that 2-3% of the worlds energy is consumed by server farms. So the proposal is to put the server farms by the windmills and solar plants since data is so cheap to transmit.  Servers need to get more intelligent so that they run closer to 100% utilisation (rather than current 30%) by switching themselves off etc.

He forsees the world running on simple low power terminals. Yep. bring back  the Wyse50’s 🙂  But more likely to be mobile phones! Especially after his trip to Soweto to see how they are using phones there.

Also discussed the idea that every moving object would have a sensor hooked into a vast database so your phone could be measuring CO2 etc.

A revealing chart showing global hectares available per person and current usage levels with the USA standing out as usual.