Unfortunately the link doesn’t work on mobile devices as it redirects to their mobi.alantours.co.za website and strips the last bit of the url 🙁 🙁

Here’s my little spreadsheet of the 1,981 miles of biking I did with links to the Strava files:-

And here are the biking gpx files mapped using Adze:-

and here is all the travel by internal combustion engine :-

I didn’t sleep at all well, maybe it was the excitement of visiting the Victoria Falls a childhood dream or maybe it was the bed!  The previous evening had been pretty awful with all the locals dossing about watching football 🙁 plus a silly ticketing system at the bar. Unfortunately for me  I  had already booked and paid for 4 nights.

For breakfast  I took myself of to The Shearwater Cafe followed by a stream of the usual touts :-(, Interestingly Shearwater seem to own everything in Victoria Falls.

I wandered down to The Falls and paid my $30 entrance fee. The falls are totally spectacular and didn’t disappoint at all far better than I ever imagined just so wide, nearly a mile, the volume of water is totally immense making me wonder why so much of Africa is desert and that Zimbabwe is importing food from South Africa.

I took loads of photos until the inevitable happened and the camera became waterlogged with the spray 🙁 🙁  fortunately the iPhone kept working.

I went to the internal cafe, Shearwater again, and tried to dry it out. I was not alone 🙁 a lady had an identical D550 that had suffered the same fate, she was in a much worse position than me as her travelling was only just beginning. She is off to China via the ‘stans. It’s a small world – she recognised me from the border post!

Then it was back through the touts to the town 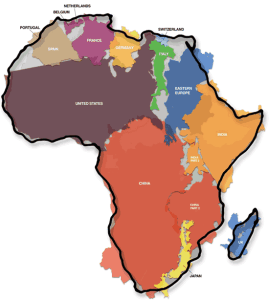 Apart from the camera a great ending to my first African trip 🙂 So pleased that I made it to the falls by using the train and safari vehicle. I wouldn’t have had time to bike the additional 1000 miles. Africa is just so vast it’s hard to imagine as you can see from the diagram.

Once home I guess it will be time to send the Canon back to Colchester Cameras yet again! My next camera I think will be a Nikon which apparently are a lot more water resistant.

I left The Old House jut before 8am after the owner rescued the girl from faffing about on her ancient Windows PC trying to sort the bill out.

The day started with a brisk headwind as you can see from the flags image and a climb of cause. Reaching the main road I came across a huge queue of trucks waiting to get into Zambia. I turned of and went down the remarkably quiet road to the Zimbabwean border post, passing large troops of monkeys at the roadside.

At the border there was a queue of 3 trucks 🙂 so I just biked straight to the office. I must say I love these border crossings on a bike! No queues ultra friendly guys and all very civilised I handed over my $55 and in return my passport page was filled with a bright sticker (I later learnt that for $10 more you can get a visa that admits you twice).

So on I cycled I was surprised to see several trucks carrying loads of refined copper cathodes obviously from Zambia. Another interesting thing was no trucks were carrying containers. Lots of elephant dung on the road which I wasn’t expecting. I didn’t see any but an oncoming car stopped to warn me of a herd crossing the road 1km away so they are close. The only animal I saw apart from a dead snake was a poor tortoise in the road, I chivvied him up to get to the verge before a truck got him!

Finally I made it to the Shoestrings Lodge/Backpackers must say it was quite a bit worse than I expected with an uncomfortable bed and need of maintenance 🙁 Plus  decidely expensive since Zimbabwe lost its currency to hyper inflation in 2008 (Ten Trillion notes are sold by the pesky touts in the street) they now use the US dollar.

My pics of the day are here