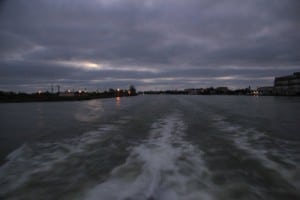 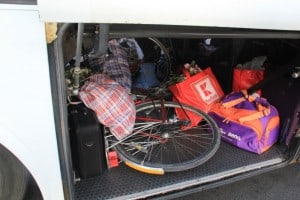 The final 37km of the Danube Bike Trail has to be done by boat as there are no roads in the delta, although Ceausescu was intent on draining the region and making it farmland. There is an interesting website about it here

The main river splits into three channels around Tulcea the North channel is the border to Ukraine whilst the centre channel is used by shipping and ends at Sulina where the Zero km marker is situated. The land has ‘grown’ so actually the channel is now a fair bit longer

Its not possible to go there & back in the day so I took the 1.30pm ferry, it takes 3 hours to get to Sulina with several stops en route. It was totally packed with fishermen and their huge quantities of tackle, apparently autumn is peak fishing time. The price is reasonable at £8 plus £2 for the bike. 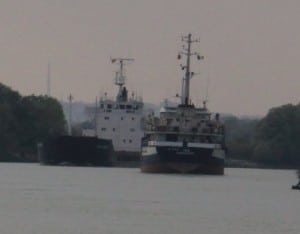 You are greeted by a huge number of folks desperate for you to stay with them! However, I ploughed through them and stayed at Vila Alga where I was smoked for dinner.

A relaxing interesting day especially seeing the huge size of the grain carriers passing each other in the river channel.

All my pictures of the day are here including the one below which warns you about riding in Romania with too narrow wheels on your bike.