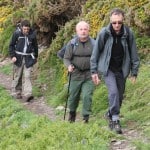 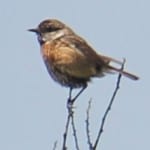 Today was all about the weather, there was little else to see due to the very low cloud. At 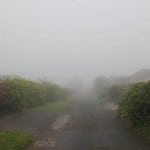 Bigbury you couldn’t even catch a glimpse of Burgh island.

What I did see were the huge number of planning applications tagged to everything that couldn’t move, Cambridge may think it has a problem of over development but crikey these seaside towns are inundated with us rich oldies pouring millions in to get a sea view. My theory is that the eye / brain  seeks movement, hence a tiny few of us walk, the majority want to sit and watch the flicker of a TV set and those with the dosh want to watch the tides come and go 🙂 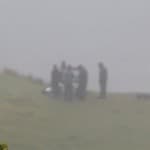 I finally reachedAt the Avon ferry after taking the wrong turn in  the farm at Mount Folly where I met the couple who I had met at Wembury, although unbelievably it was me who recognised them 🙂 plus a group of 4 lads all doing the path from Plymouth towards Poole. We were all getting a bit concerned as he didn’t show till 10.20 and the alternative land route looked a nightmare.

As the day went on the rain & squalls started, in Hope I hung around in the cafe, debating with myself wether to make it a short day.  The 4 lads marched past, the couple I noticed snook into the back of a taxi! The price the pub wanted, £60 for the night sealed it’s fate, I  soldiered on. 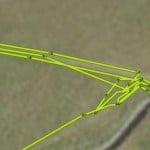 Along Bolberry Down it was horrendous, almost zero visibility heavy squally showers, the Scarpa boots leaking like sieves & sliding all over (well they are 4 weeks old!). around bolt head I got confused and ended up walking the same stretch 3 times, thus adding half an hour to the day. The Canon D550 became confused as well and and decided to stay on all the time!

Finally reached the outskirts of Salcombe where the YHA is but decided to continue up and down the hills that separate all the beaches and get into Salcombe proper. Where the nightmare of finding a room began. The pub wanted £70 for a room only! one house £60 for the room only, I phoned up another 5 all full/closed etc Finally Mike (who had tried to contact me all day but eh this is the UK mobiles only for the big townies)  came to the rescue and found me Ria View but with a small disadvantage of a late breakfast at 9am, so the Ria is where I’m at and very pleasant it is too.

I really can’t understand the mentality of folks, running a business with fixed costs, who would rather have nothing than say £40. Especially the pub who lost my evening trade too.

The photos are here, statistics here, and Everytrail below
Bigbury to Salcombe on the South west Coastal Path at EveryTrail