The test came up with:-

Guess I will be heading over to Elance to get a coder to tidy it up for me for a tenner. 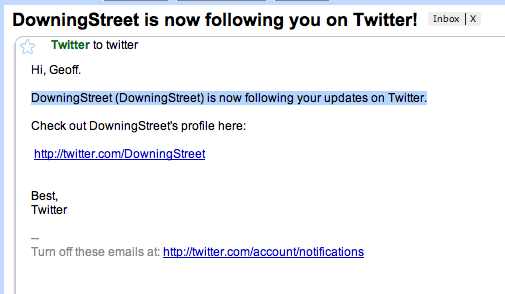 Never realised that Gordon Brown and his cronies at 10, Downing Street cared so much about me that they want to follow my tweets. 🙂 and by implication my blog posts too..

I’m not alone! Currently they have 208 followers and they are following 140 but with only 12 tweets so far.

Perhaps they should do a Jason and hand out a Mac Air if they get 20,000 followers 🙂 Yesterday, after 3 years of construction, the second phase of the Grand Arcade project in Cambridge opened. The first phase, John Lewis opened in November 2007, the final phase, Cambridge’s new central library is scheduled for October this year.

Emily and I were there, taking lots of pictures especially of the Ribbon Acrobat team.

The queue for the Apple store (The fifteenth in the UK) was by far and away the largest and they gave away around 1000 T shirts in the first two hours, the T shirts were wrapped in a way that only Apple could do – very impressive packaging. I very nearly bought The Air but as a retiree I have to watch those thousand pounds disappearing 🙁

Apple as a retailer is simply amazing, the concept of every staff member carrying what is in effect a portable till so that they truly serve you with no additional queuing (even emailing you your receipt). Compare this to IKEA and John Lewis who force you to queue, just to pay for your object of desire.

Apple also offer a personal shopper scheme – where you get the undivided attention of an assistant for 1 hour to help you make your purchase. This coupled with the training evenings at the store is pretty awesome. In fact I think I will spend my money on buying some Apple shares!

The Grand Arcade seems to be a success for my (small) pension fund at USS (from when I worked at The Cavendish). At the opening I counted 18 of the 52 outlet spaces not let (35%). However, looking at this unlet area of 2225 m² against the total of the 52 store spaces available of 15,793m² it is only 15% by area unlet this reduces to 5% if you include the monster John Lewis store of 26,013m² (Although I notice that the John Lewis store could easily be removed from the main Grand Arcade if they so desired). So pretty remarkable for such a huge development in a provincial town of 120,000 folk.

I am trying to think what sort of retail shop I could open in the smallest unit available at 13m² any ideas out there?