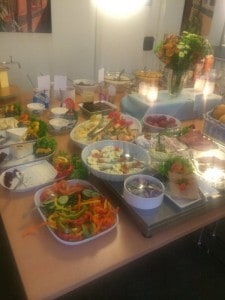 Once the kids in all the rooms went to sleep at 11pm I was away with the fairies. I made sure I was one of the first to breakfast and what an incredible spread the Dan Hostel had laid out, although I guess once 30 or so teenagers had attacked it would be a different story.

I biked back to the sea and continued my way along the coast, good paths & cattle grids with sunshine made it a very pleasant trip especially seeing the Kammerslusen flood gates that have prevented Ribe being flooded in modern times. 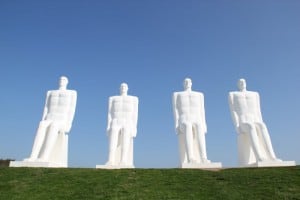 I swept through Esbjerg only stopping at the local Aldi and also to admire the Man meets the Sea sculpture by Svend Wiig Hansen. I had earlier booked a place to stay but one of the problems with trying to follow a track, when you are zoomed in so you can easily see the turns is that it is easy to ‘miss’ points of the screen. So eventually when I zoomed out I was horrified that the place  I had booked was miles behind me 🙁 Neer mind I thought I will cancel it there must be somewhere else!

Several miles later nothing had materialised and all was woodlands and second homes 🙁 I eventually stopped to ask a lady where the nearest place was to stay – she pointed with a long arm back where I had come from 🙁 so after some thought & discussion she said I could stay the night with her husband and herself in their second home 🙂 Not only that she had some fresh Sole that we could have for dinner.

So a potential uncomfortable night in a hedgerow turned into a convivial evening discussing the bike route and being shown the excellent Danish bike route website , cyclistic.dk . They did the route it a few years ago and yes accommodation is difficult! We also discussed Scottish Independence. Apparently Greenland a dependency of Denmark isn’t in the EU.

I’ve now downloaded the Danhostel app which should show the distance to the next hostel and have an outline planned with my kind host.

The Strava for the day is here and pics here