With a cock crowing away outside my door it was obviously time to be on the move!  so after dutifully doing my emails etc I was back on the road at 6.45am ready to cross from the East coast of Thailand to the West coast. 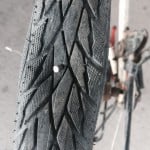 The wind was behind me and with smooth roads I made good time stopping for a Thai breakfast followed by a Amazon smoothie. I was pounding along quite merrily when suddenly I was bumping along with a flat rear tyre. 🙁 So after taking the luggage off and upending the bike I discovered a 2 inch nail had embedded itself in my brand new tyre & innertube :-((  I quickly extracted the nail, changed the tube and was on my way again. 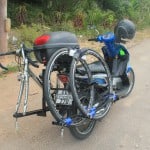 On the way I met a Scottish guy who had made a contraption to fix his road bike  onto his moped. I guess in Vietnam they would just have strapped it on with some bungees 🙂 In Puang Promkhon I found a shop where they expertly fixed the punctures caused by the nail going right through the tube 🙁  So I now have a spare again. It’s amazing that I did the 3000 miles to The Black Sea with no punctures whereas in the 1800 miles cycled so far I have had 4 punctures 🙁 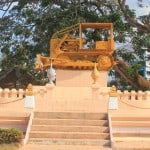 After 80 miles I called it a day in the city that has a bulldozer on a pedestal in the central square,  Phrasaeng. I really struggled finding the hotel which everyone was sure in the town. At one point a guy had me following him on his motorbike, only to take me to his house! I turned tail & escaped. Eventually someone in a smart car showed me where it was – I would never had found it as the sign was totally in Thai.

So by the time I stopped cycling it was 83.9miles when I arrived at โรงแรมพรทิพย์. (Hotel Porntip according to Google translate). Here is the Strava: