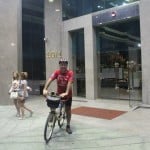 Back on the road at the crack of dawn, very pleasurable too, even the 12 lane highways out of Bangkok were good fun,  apart from when 3 lanes peel of to the left and I needed to be going straight on  but, as you can tell, I survived. 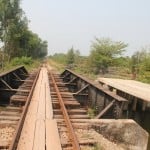 Later on I decided to do some exploring all was OK until I came to a section where the road stopped 🙁 looking at OSM I could see it restarted again a couple of miles further along the railway track I could also a track where other folks had had the same idea so I went for a bit of off roading, where the missing road bridge was someone had thoughtfully put planks on the sleepers so you could use the railway bridge – good fun until I noticed a train in the distance 🙂 The remainder was through delightful villages & around Buddhist  temples.

I made the 61 miles it to the previously booked  Baansuanphidchamika so called resort , although it’s just a group of chalets, a bit more deluxe than the ones from my childhood at Butlins in Skeggie but chalets all the same. 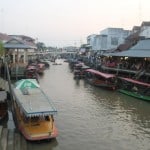 The great thing about this place is that the floating market at Amphawa is literally a hundred metres down the road, so I gave Sally a little tour on Facetime, which works incredibly well on 3G, and then returned this evening for a  gorgeous fresh fish & rice.

The new iPhone holder worked very well, once I had discovered thE two lugs that stop it sliding out! The big plus is that I can leave it plugged into the charger so I arrived with 100% charge the minus (as always) is that my sweaty hands and head stop the finger action working 🙁  but no overheating today!

Here as usual is the Strava:

and the pictures of the day are here