Totally staggering story about the manipulation of photographic evidence in driving offenses taken from The Newspaper.com

“The spread of photo enforcement depends upon the truism that the camera never lies. A photograph presents a record of exactly what happened, free of the human problems of bias or misrecollection. This month, however, a UK motorist was exonerated after he proved conclusively that a traffic camera photograph issued in the London Borough of Lambeth did lie”

Here is the same image displayed at different zoom levels.

I have a set of skiing goggles & swimming goggles but who in there right mind wants a set of onion goggles? especially at £13.99 a pair! For those that must, available in Cambridge at the new store of Home Store & More in the old Beehive shopping centre. 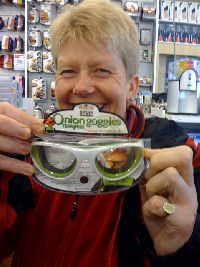